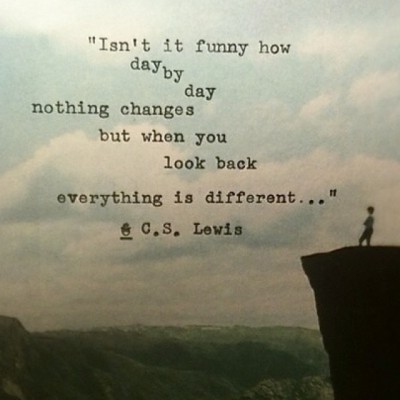 “There is nothing like suspense and anxiety for barricading a human’s mind against the Enemy. He wants men to be concerned with what they do; our business is to keep them thinking about what will happen to them.” ― C.S. Lewis, The Screwtape Letters

Approximately two and a half years ago I began to feel like my life, as I knew it was over, it was changing. It was what I now recognise as a time where God was changing my heart and preparing me for the next season. I can recall sitting in my wee studio apartment in southwest London crying because I could not understand why I felt so restless and yet so scared of change.

It was about 10 months later when I was sat in my new apartment in Stockholm that I could see all that God had been doing. Why was I ever concerned?

For since the creation of the world God’s invisible qualities—his eternal power and divine nature—have been clearly seen, being understood from what has been made, so that people are without excuse. -Romans 1:20

In just over seven weeks I will be in a position for God, with all his eternal power and divine nature, to do amazing miracles in my life. I literally have no plan as to what I will do next, except to find a job that I am passionate about or re-start a few old projects of mine. Aside from being able to food and clothe myself, I’m ready for life to take me where I will best show the greatness of a God that wants the world to see how loved they are.

However, in my humanity I still worry some days and get scared about finding a job in a country I’m still not fluent in the language…so, my daily reminder is to stand in the belief that as I go by my day-by-day he will make the way, he will carve out my path.

“People are without excuse”

I am without excuse, my life is His.

What profit has the worker from that in which he labors?  I have seen the God-given task with which the sons of men are to be occupied. He has made everything beautiful in its time. Also He has put eternity in their hearts, except that no one can find out the work that God does from beginning to end. I know that nothing is better for them than to rejoice, and to do good in their lives, and also that every man should eat and drink and enjoy the good of all his labor—it is the gift of God.

I know that whatever God does,
It shall be forever.
Nothing can be added to it,
And nothing taken from it.
God does it, that men should fear before Him.
That which is has already been,
And what is to be has already been;
And God requires an account of what is past. -Ecclesiastes 3:9-15

I was listening to a podcast this morning, about God’s will for our lives. He was talking about worrying about decisions we will make, from dating or getting married to selling a business or moving. The speaker quoted Colossians 3:17 which says, “And whatever you do, whether in word or deed, do it all in the name of the Lord Jesus, giving thanks to God the Father through him.”

So, that’s it…do everything in His name.

He will guide me.

He will open doors no man can shut.

The future is in His hands.

Error: Twitter did not respond. Please wait a few minutes and refresh this page.